Become a Collaborator! | Become a Patron!

What and Why is #DinosUnite?

The world is changing fast, and "we are not prepared for what is coming" -- greenpeace.org. Learn more about Climate Change 2022: Impacts, Adaptation and Vulnerability. Learn more about the rapidly growing inequality problem; "Our economic and racial divides grew even wider in 2021" -- inequality.org.

The bad news: This is not a firedrill. But there is good news, too! "Nonviolent protests are twice as likely to succeed as armed conflicts – and those engaging a threshold of 3.5% of the population have never failed to bring about change." -BBC. Meanwhile, “you never change things by fighting against the existing reality. To change something, build a new model that makes the old model obsolete.” --Buckminster Fuller. Furthermore, "Music and Social Justice" Movements often go hand-in-hand. --IEP.

#DinosUnite is about connecting and empowering people; uniting all groups to face common threats, to engage in the common goals of survival and happiness. We strive to make engagement fun and easy. 8 billion people, 8 billion species, 1 planet: Together we can win!


"Let me break it down even more
You wanna win a culture war?
You gotta get how the REXes divided us
You gotta see how their REX-vision blinded us
And our way through all this justice obstructed?
Reconnecting the divisions constructed!
Speaking through the derision instruction!
Acting now before our species destruction!"

We are in it to win it, and you can too. It's easy and fun to help!

We are unicorns, and this is a dream,
Learn our technology and go build a team,
Your only chance is to #DinosUnite,
This is WAR so get ready to fight.

Your only shot, is to face the emergency,
To spread your truths, embracing the urgency,
To make it cool, to swallow your greed,
To make it hot, to do what you need! 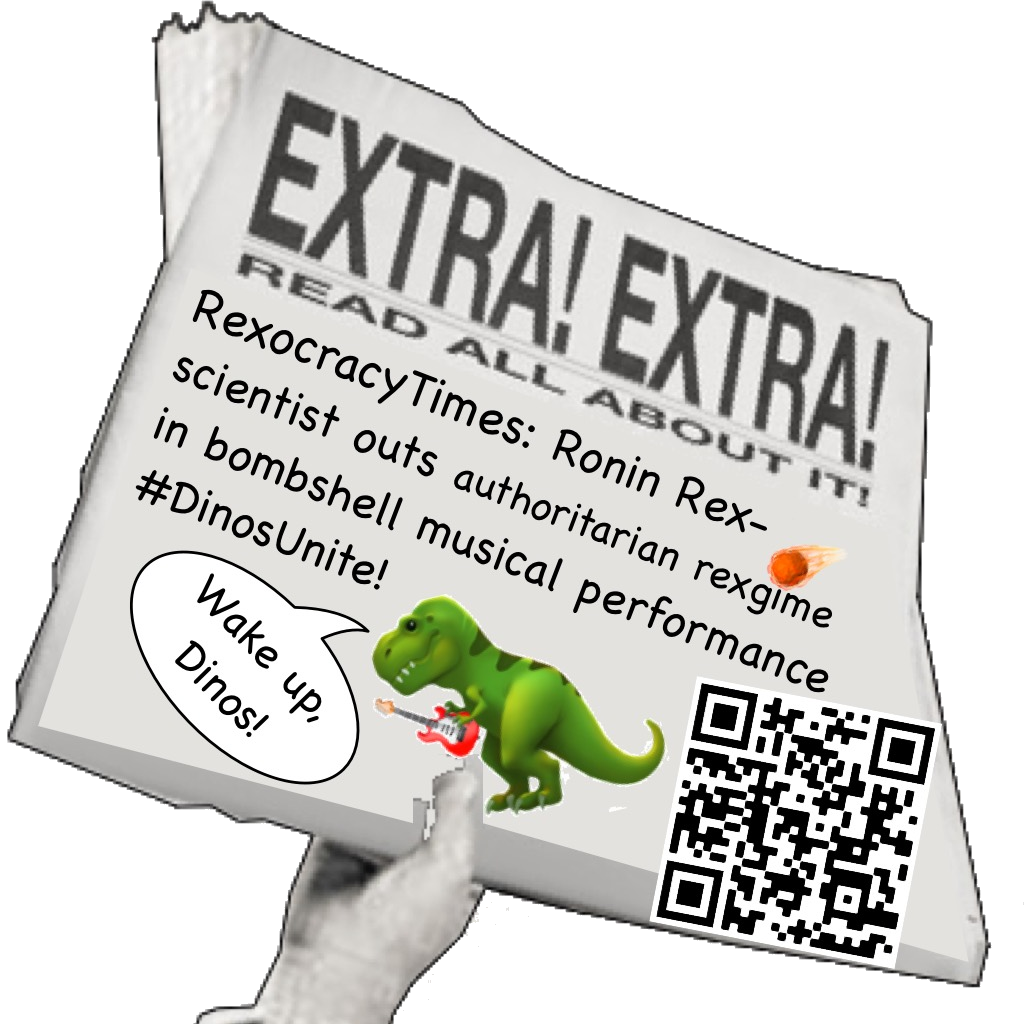 In an early phase of #DinosUnite, we imagined our goal was to Get The Message Out about climate and inequality reality, and then People Would Respond en-masse to the seriously dangerous situation They and Their Children are facing. Alas, less than 1% of people we exposed were motivated to engage themselves personally in collective human objectives. Of those who were motivated, most were already fully engaged, but Burning Themselves Out against massive Social Resistance.

Humans evolved in environments where being together was more important than being right, and Following the Hierarchy was the surest way to pass on genes and ideas to future generations. Humans developed advanced Mental Defence Mechanisms, such as Cognitive Dissonance, to tolerate any possible social circumstance. Cognitive Dissonance allows humans to whole-heartedly believe in literal paradoxes, if it suits social cohesion and mental well-being.

While #DinosUnite is about communities coming together to address Common Long-Term Needs, people and communities were threatened by the idea that anything was wrong to begin with. Potential collaborators were at odds with themselves, between acting authentically for equality and future, or fitting into their community's conventions. The motivated few were compromised by intensely Homogenous Pressure to Conform or stay silent.

And so, we pivoted. #DinosUnite 2022 fuses Art, Community, and Technology to connect concerned citizens and drive Long-Arc Values-Oriented Collaboration. Since the root ingredients of our global crises are Inequality and Apathy, we focus specifically on Empowering Artistic Expression of equality activism; Re-Normalizing Empathy and Engagement vs the consumption and escapism currently glorified in pop media. Our primary objective is to reach isolated would-be activists, and help them find the support they need to survive and act to their fullest potential. A secondary objective is to attract "bystanders*" to enjoyable micro-actions, showing by example that engagement is fun, easy, and meaningful. *"You can't be neutral on a moving train!" (Zinn)

Jeff Knowunzy is a Ph.D. (Cornell ’01-’08) ex-professional (Google ’09-’14) social entrepreneur (One World Innovations ‘14+). At Cornell University, they taught undergraduate Computer Science and researched incremental optimization: optimization problems with time-evolving constraints. At Google (Seattle, Zürich, Paris), they were technical lead for an award-winning team that delivered zero-cost mobile internet to millions in the developing world. They are currently focused full-time on climate and inequality.

What if gender was a war?
What if the rich enslaved the poor?
What if fun was burning poison?
What if time was an illusion?

What if our homes were prisons? Built up bricks of indecision.
What if food could grow on trees, what if need was a disease?

What if rings were chains? Mere colonial remains...
What if flags were stagnant smoke? And ownership a joke?
What if jobs were games? Would you play them just the same?

What if the truth could lie?
What if dinosaurs... could... fly?