See Act I in the meta-verse or on youtube!
Write jeff dot knowunzy at gmail dot com to find or host a world premiere. Learn More about the project.

The first act of a post-rock opera, by prehistoric celebrity Onesie-the-Dinosaurus. We begin in Canada, in 2019, where Onesie recounts their story to an audience of monkey-people. By Set 7, we flashback 65 million years, when Onesie discovered the secret of the infamous asteroid, and gained possession of a #unicorn's universal communicator. Can Onesie learn guitar, and find the words, to rally the #dinosaur kinds to unity and avoid a colossal #extinction event? They might as well try!

Act1, Scene1, Set1: "In A Onesie". Onesie goes to #BarCourcelle in #Saint-Henri, #Montreal. It's #OpenMic night. Onesie takes the stage to tell their story: 65 million years ago, a Unicorn #Spaceship crashed into the #earth. Onesie was knocked out and frozen for 65 million years. They woke up on a melting glacier near #Newfoundland.
Additional Thoughts: A UnicornFlyingObject is paleontologically indistinguishable from an #asteroid,... from The Asteroid... which ALLEGEDLY wiped out all the highly-evolved dinosaur species and incredibly advanced rexocratic society!?! Sounds #ridiculous.
Observations: The crowd may-or-may-not include several #time-traveling #inter-galactic groupies.

Act1, Scene1, Set2: "Kingdom of the Dinosaurusses". Before the big crash, the REXes ruled the kingdom of the dinosaurusses. Onesie didn't want everyone to die, so they developed a plan to save their dinosaur peers from the imminent catastrophe. (Shout-outs to celebrity dinosaur voices CHRISTIAN, JANA, SILVIA.)

Act1, Scene1, Set3: "Follow That Dino!" Onesie believes their plan failed, and all the dinosaurs are dead. Onesie sees the new earthlings face a similar predicament, so they appeal to the audience for support: "I'm not gonna fail us, again." More time-travelers have arrived; they sing and dance along, apparently knowing the song by heart.

Act1, Scene1, Set4: "Segue". Introducing Rym-Manuel McRapta, who summarizes the context: While Onesie performs at open mic, something very exciting is about to happen!

Act1, Scene1, Set5: "Space Dinos". Far from Montreal, two dinosaurs land on earth, armed with six-string communicators, looking for Onesie. They share their survival story: "We were united, or we'd've failed," but Onesie was lost in the havoc.
Director's Note: These Die-Nos are none other than the intergalactically legendary #DinoRock pioneers, THE MOUTH GUITARISTS!

Act1, Scene1, Set6: "Post-Rock Dinosaurusses". The search for Onesie intensifies, every-where-and-all-at-once on modern day earth. Dinos and groupies arrive from all over the universe, joining together for global #flashmobs. "We are post-rock Die-No-Soar-Usses!" How did they survive?!?! Will they find Onesie? Meanwhile, why not sing-and-dance-along with the post-rock dinos!

Act1, Scene1, Set7: "Onesie W@nders". Back in Montreal, Onesie goes to sleep, and... FLASHBACK! Before becoming aware of The Asteroid, Onesie was a world-meandering tyrannosaurus. "Are you ready to know? The dinos are dying. Now you know!"

Act1, Scene1, Set9: "Empathy (What are you going to do?)". Onesie struggles to rally the dinosaurs to truth and action! What can they possibly do?

Act1, Scene1, Set10: "End of an Era". Die-nos are waking up everywhere, and starting to see that they will go extinct unless they #DinosUnite. "All of us woken, facing the broken, and failing rexocracy... Each of us all-in, we know we have to win, now is the time to break free!" Scene 1 ends.

Act1, Scene2, Set1: "Dinocracy". Onesie points out that unquestioningly following the status-quo is leading the dinosaurs to TOTAL EXTINCTION. "They've trained you to be bored." The rexes feast irreverently; two stoic stegas guard the stage.

Act1, Scene2, Set2: "Different Kinds". Onesie teams up with some colleagues to describe the species-based hierarchy of "work", suggesting that through passivity they are in fact participant accomplices. Some inter-galactic fans have accumulated below the stage but cannot pass the stegasaur guards. (Big kudos to dino-collaborators JAMES, JASON, JANA, KAREN, and SOFIA.)

Act1, Scene2, Set3: "Slaves". Onesie cuts through the PC crap, since it only keeps the dinos feel better about their roles serving the ecocidal rexocracy. The banquet hall is a debaucherous mess. Outside, inter-galactic fans gather below the stage and rock out in support.

Act1, Scene3, Set1: "Little Dinosaurus". Outside the banquet hall, Onesie plays a lullaby for the younger dinosaurs, apologizing for the mess, "only you can stop the end". =)

Act1, Scene3, Set2: "Break Us". Onesie vents their frustration with the rexocracy, "Why are you trying to train us? Do you think that you're a god?" They then summarize the challenge of resisting a powerful authority, which could easily be applying its energy more productively: "Paper vs rock, scissors vs swords, burn all the honey, fix all the words! Food not bullets, water not bombs, thought not dogma, bridges not walls!" #equality #planet #dinosunite

Act1, Scene3, Set3: "Privilege". Onesie lays out concisely the responsibility of privilege, and calls on all the post-national dinos to engage at maximum potential. A few interesting characters observe from the shadows... an unassuming allosaurus, a stylish spinosaur, and a sabre-tooth tiger.

"What if we listened and learned, to how our privilege was earned,
and if we rose, if we turned, into ronin re-sworn,
if we echoed the silenced, until they were heard,
it's time to swallow our pride, and let the monuments burn!"

Act1, Scene3, Set5: "Feed The Rexes". Onesie pretends they are D-Rex the T-Rex, king of all the dinosaurs, and the rexrockpera begins. D-Rex explains how he controls society. You gotta feed the rexes first, then train them all to focus on their roles, or punish them for resisting.

Act1, Scene3, Set6: "Work Dinos Dinos, Work". D-Rex laughs at the dumb dinos whose existence and future is being compromised by their own day-to-day effort serving the rexocracy.

Act1, Scene3, Set7: "Buy More Shhhh!". D-Rex reveals how to get everyone to play along with inequality -- say the poorest kinds are "developing" (rather than exploited), insist that waste is progress, and of course, don't pay the women!

Act1, Scene3, Set8: "After/Words". Post-Nationals of all kinds and ages form a drum circle in the aftermath of Onesie's final set. McRapta narrates, and the curtain closes. That's all folks.... Or Is It!?????

"Dinos Embrace". While Onesie sleeps, and the post-nationals plot, The Mouth Guitarists remind any monkeys watching the show how little they actually know about the fate of the dinosaurusses! Stay tuned for Act II, or better yet, get involved! RAWRRRR! "Of Course we saw dat ast’roid coming! No way us dinos gonna go out easy." 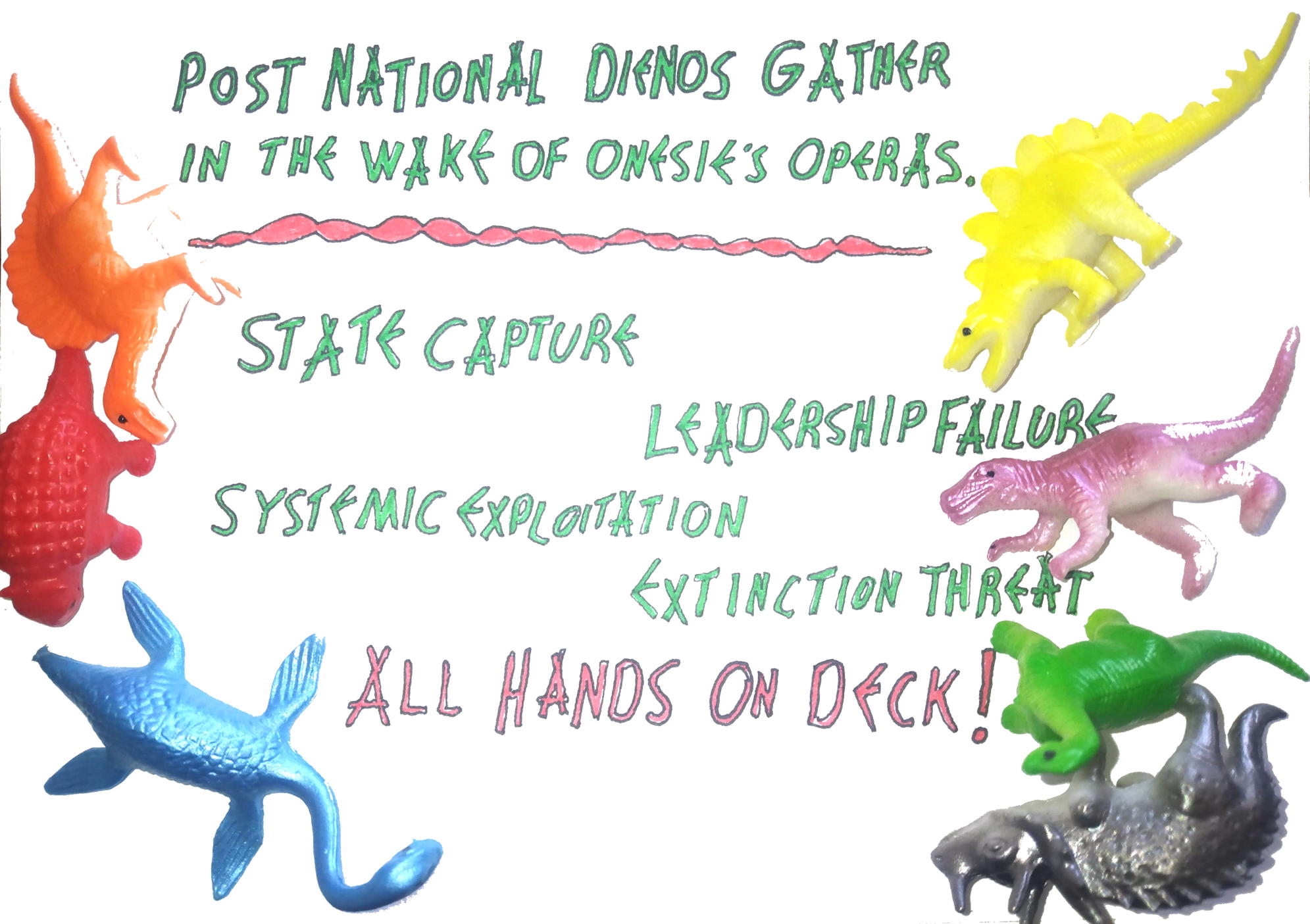 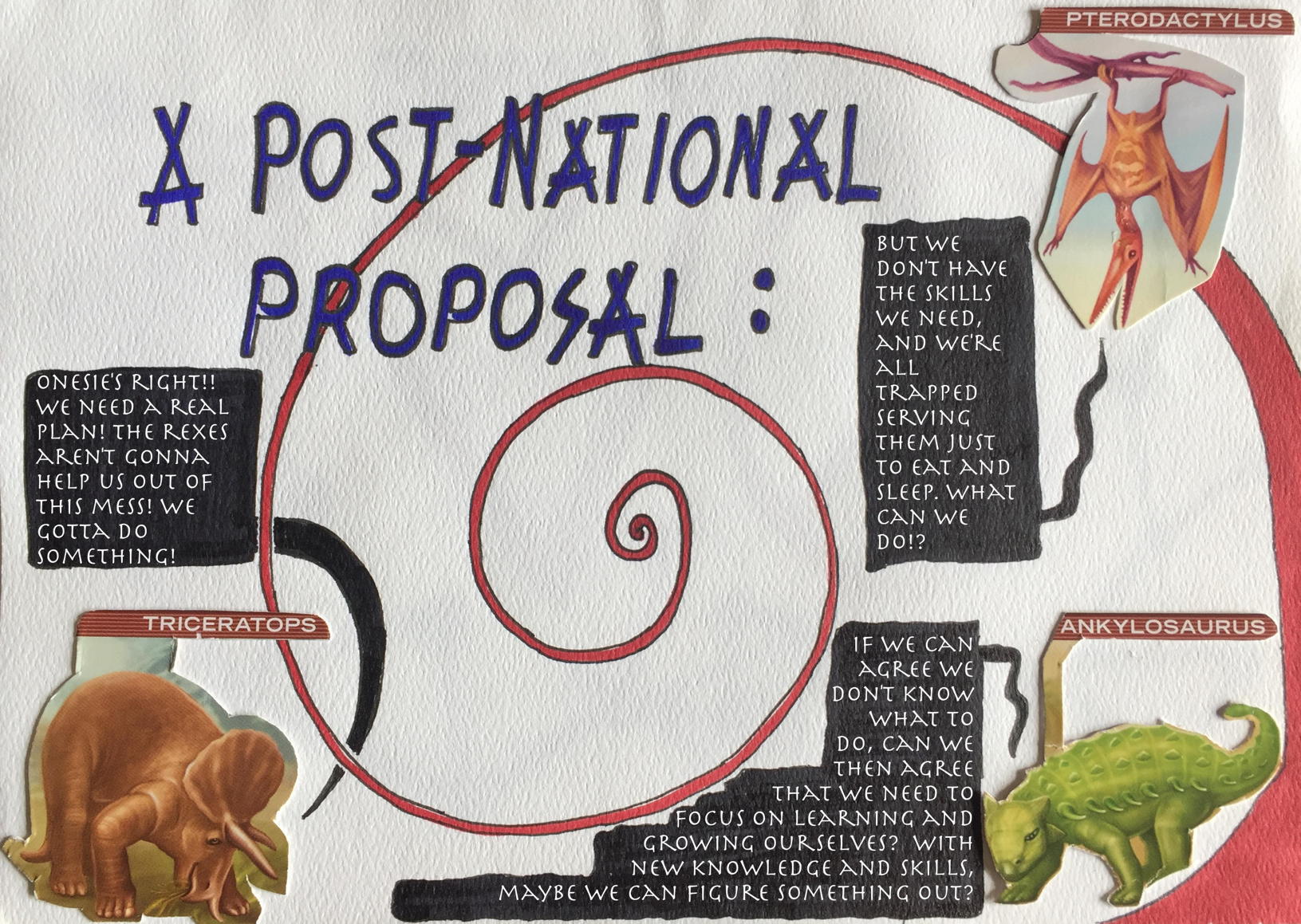 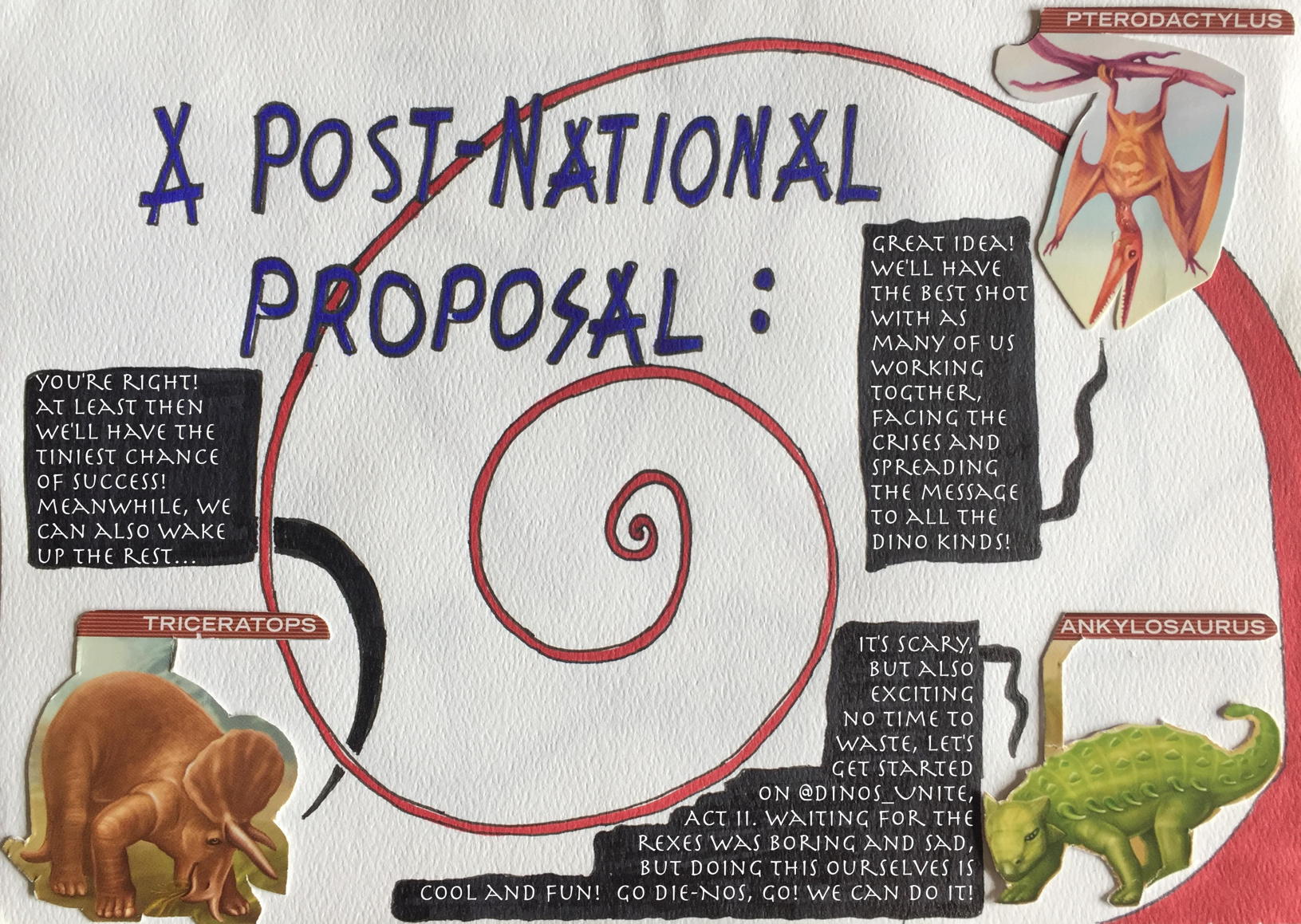 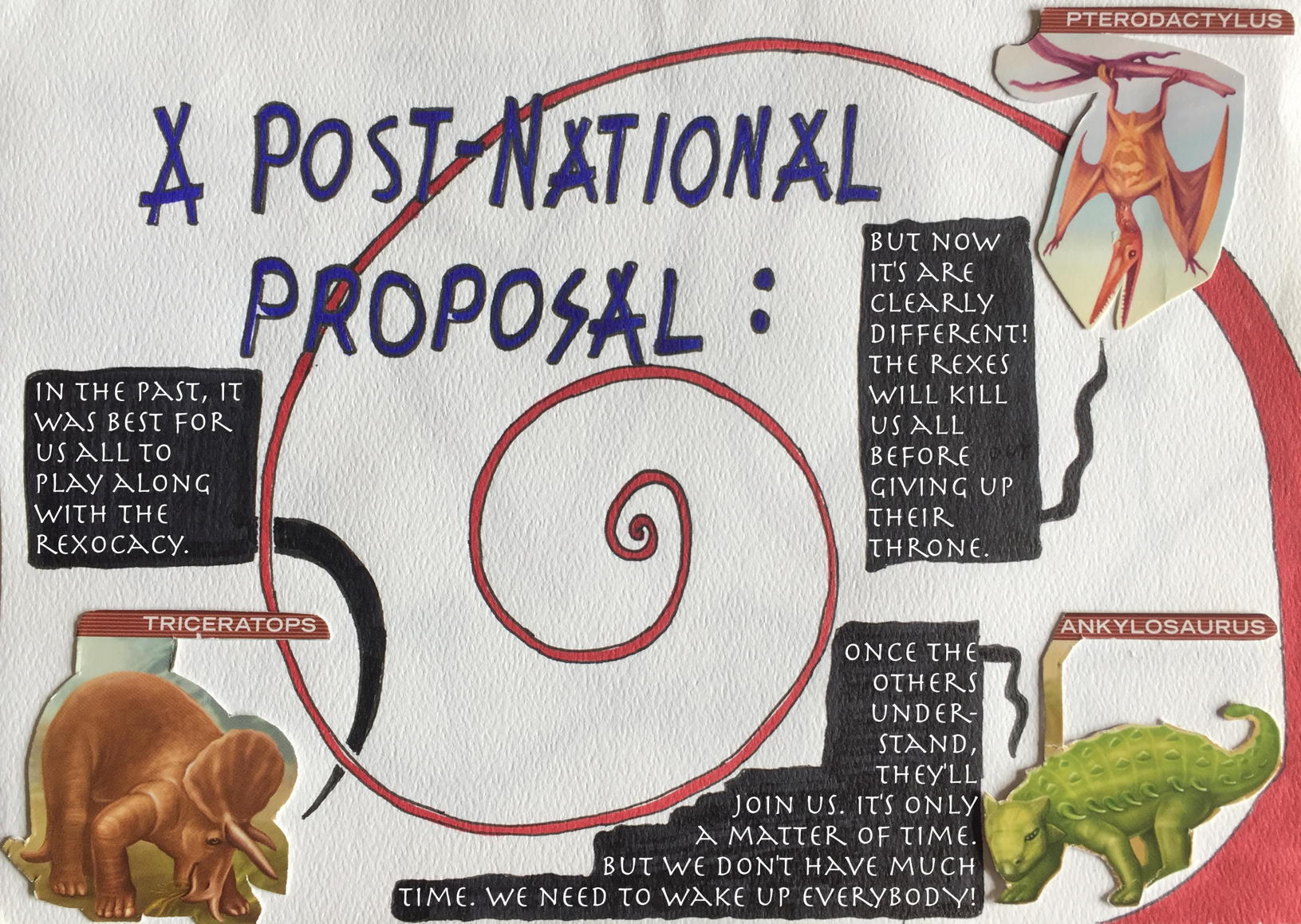 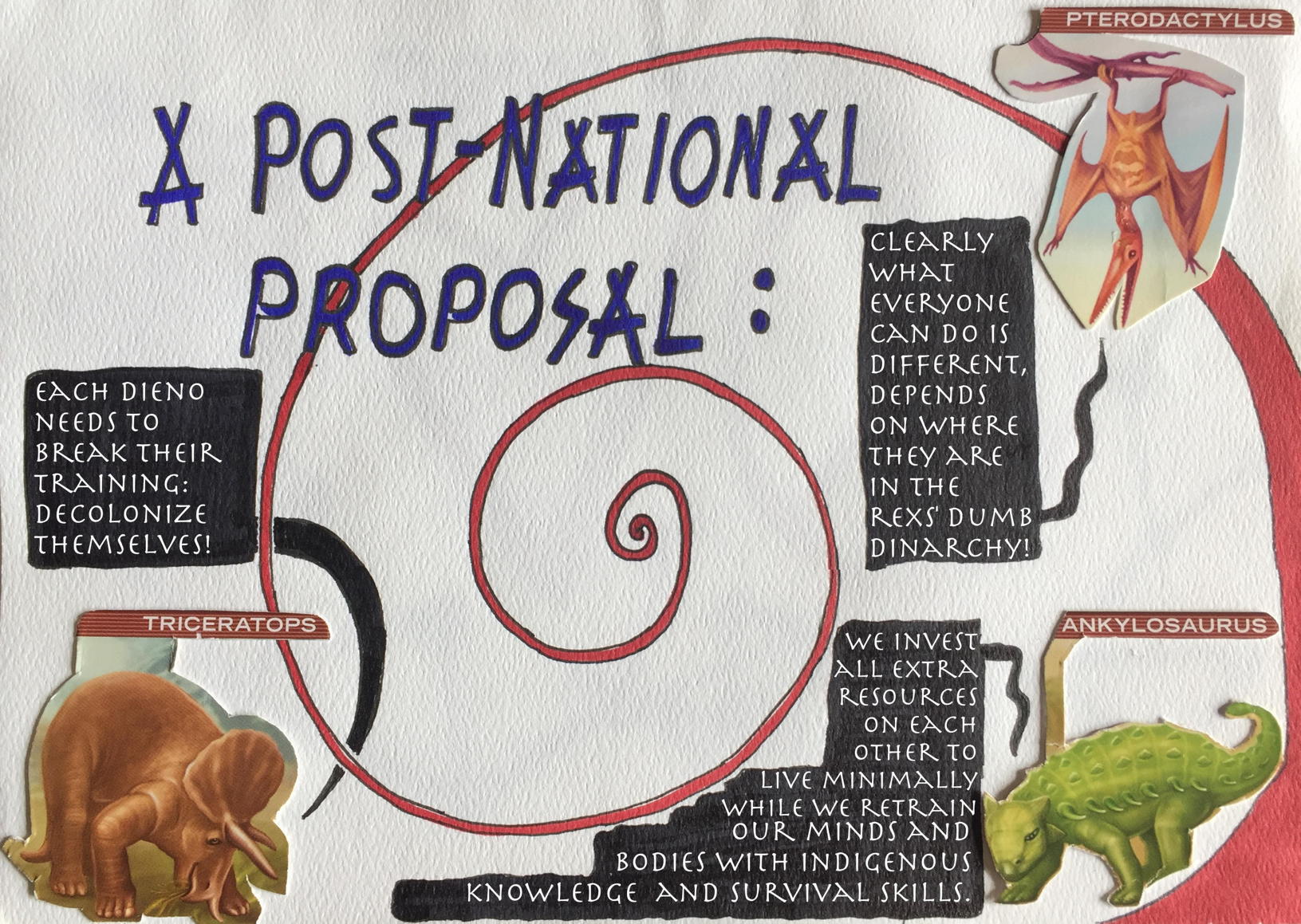 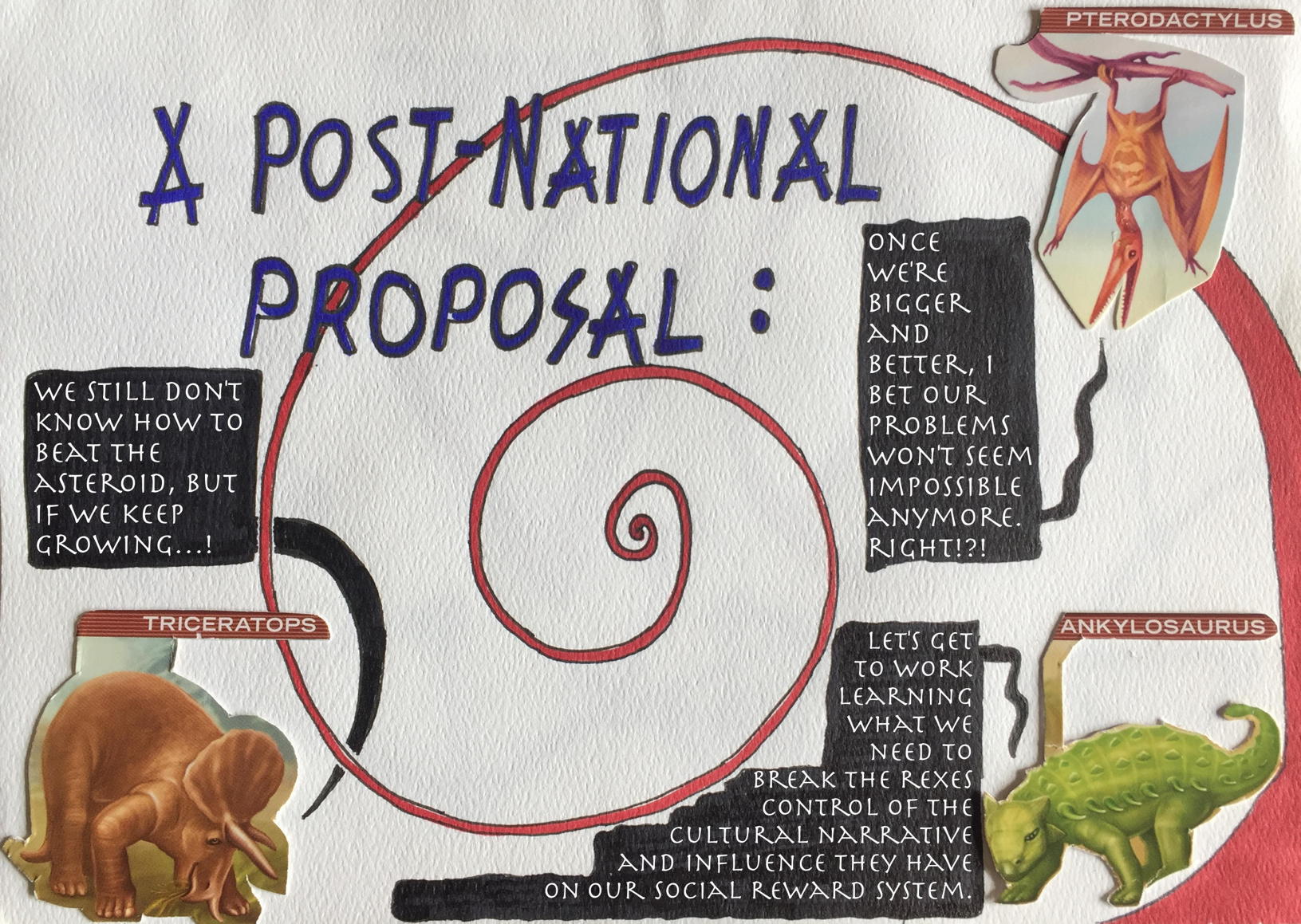